It is estimated that 1.35 million people, that is one-fifth of the population in Hong Kong are living below the poverty line (Hong Kong Poverty Situation Report 2016). While the Hong Kong government has spent considerable resources to reduce the number of households living in poverty, the widening poverty gap and increases in the number of older-adult and single-parent households has resulted in a group of households trapped in poverty. To address these challenges, The Symposium on Poverty Alleviation Strategies in Mainland China, Hong Kong, Taiwan and Macau aims at bringing together local, and regional scholars to examine the poverty situation in the cross-strait region and to identify effective poverty alleviation measures and strategies.

How to overcome problems of economic inequality in Hong Kong

Forty years of the reform and opening of the Mainland have made remarkable achievements in poverty alleviation. Especially since 2013, according to the national strategic goal of building a moderately prosperous society by 2020, the plan of ensuring “all populations in rural areas are lifted from poverty under current standards, poverished counties lose this label, and problems with regional poverty are essentially solved” is a new exploration for modern China in the practice of poverty alleviation. This study will investigate and analyze the development of China’s precise poverty alleviation and top design, objectively and comprehensively evaluate the results it has achieved and new problems, priorities and challenges faced, and project the future direction of China’s development and poverty alleviation.

Poverty in Taiwan: A profile in the new century

Professor Cherng-Tay HSUEH, James is a professor of the Department of Sociology at the National Taiwan University. Professor HSUEH completed his Ph.D. in Sociology from the University of Wisconsin in Madison, US. His research interests are in the area of social stratification, social demography, family, welfare policy and sociology of education. He has written and published a book on the changing population of Taiwan in 2016. He was the Director of the Center for Population and Gender Studies, and the Children and Family Research Center at the National Taiwan University.

Compared with Mainland China, Hong Kong and Taiwan, Macau is a micro and open economy, so it is more difficult for Macau SAR Government to deliver poverty alleviation strategy.  Despite revenue contraction in the 26 consecutive months from 2014 – 2016, Macau SAR Government still pay attention to build up a sustainable public retirement benefit system, like the sustainability of Social Security Fund (Public Pension System of Macau, the 1st pillar pension system) and the introduction of voluntary saving pension system (the 2nd pillar pension system). The paper is to review the historical development of Social Security Fund and the present public retirement benefit system.  Nowadays, the meaning of poverty alleviation is not just sustainable living, but also development, social inclusion and precision.  In order to deliver “New” poverty alleviation strategy for elderly population, Macau SAR Government studies or implements various measures, like elderly employment, smart healthcare (i.e. electronic healthcare voucher scheme) and pension finance (i.e. reverse mortgage and annuity).  The paper is to use the results of two telephone surveys to explore the feasibility of delay retirement and pension finance, as well as, the development of smart healthcare in Macau.

CHAN, Kin-sun is Programme Coordinator of Master of Public Administration and Assistant Professor of Department of Government and Public Administration, University of Macau, as well as, Chairman of Macau Social Security Society.  He is also Research Fellow of The Hong Kong Jockey Club Centre for Suicide Research and Prevention, besides, Sau Po Centre on Ageing, The University of Hong Kong.

Professor Paul YIP is the Associate Dean of Faculty of Social Sciences, and the chair professor in Population Health at the university’s Department of Social Work and Social Administration, and Centre for Suicide Research and Prevention, the University of Hong Kong. His interests include suicide prevention, population health, poverty research, demography and social policy, and program evaluation. He serves as the secretary general of the Asian Population Association and the research chair of the Family Planning Association of Hong Kong. He was a part-time member of the Central Policy Unit and a member of the Hong Kong government’s Steering Committee on Population Policy. He has published over 400 scientific papers in international journals.

Dr. Zhang is a researcher with multidisciplinary background in urban planning, economics, and social work. He has received undergraduate training (BSc and BEcon) in Peking University and postgraduate training (PhD) in the University of Hong Kong. Dr. Zhang has a wide research interest in poverty alleviation, demographic transition, urban studies, and suicide prevention.

Working Together for Injured Workers in Hong Kong

Following the release of report on the social review on the Employees’ compensation insurance system in Hong Kong, Professor Paul Yip met with Hon Mr Lee Cheuk Yan in a working meeting (22 Jan 2016) to explore ways to help injured workers return to work. Discussions in the meeting include existing barriers identified in the report, such as the long waiting time to receiving medical and health services and mindsets of injured workers. All parties at the meeting saw the pressing need of removing these barriers and improve the system for the wellbeing of injured workers.

Taking a Closer Look at the Poverty Issues in Hong Kong

Currently about one million residents live in poverty in Hong Kong; and a substantial amount of resource has been put into alleviation efforts. In pursuit of an in-depth understanding of poverty issues through rigorous research, the CSRP has undertaken a three-year study, the Determinants of Poverty and Potential Intervention to Alleviate Poverty in Hong Kong, with the Commission on Poverty. This study aims to closely examine the existing official indicators of poverty in Hong Kong and their interpretations, along with the trends, spatial distribution and the dynamics of poverty, as well as the barriers and needs of those who are living in poverty. The project completed half of its data collection to date and disseminated some of its preliminary research results to policy makers, academic researchers, social service providers and the general public in 2015.

Poverty Indicators – Behind the Scene
A general increasing or decreasing trend observed with the existing poverty indicators is often not enough to gauge the status of poverty problems in the city. To obtain a more comprehensive reading of the indicators, researchers on the team used decomposition analyses to estimate the proportion of changes in the indicators that are attributed to fluctuations in population structure. These findings were shared with policymakers at the Commission on Poverty Summit in 2015.

Sharing with the Communities

As one of the main knowledge exchange activities on the project in 2015, the team hosted the From Poverty Alleviation to Promoting Well-being Seminar Series in May. Main researchers on the project, Professor Paul YIP, Dr. Yi ZHANG, Dr. Qijin CHENG, and Dr. Shu-Sen CHANG presented their research findings related to poverty issues at the series. Professor Yip spoke about his reflection on income disparity and social mobility. Dr. Zhang presented on the effects of public rental housing on poverty. Meanwhile, Dr. Cheng and Dr. Chang shared their research findings on the psychological wellbeing of those who are in poverty. The series have facilitated greater discussions about current research on poverty issues and the gaps between sectors of research and services for those in need.

The CSRP is dedicated in translating its research findings into materials that are comprehendible to the general public. The team from the project published regularly in numerous newspapers, among which a series of five news articles on Hong Kong poverty problems in Mingpao was the most noteworthy in 2015.

The series was published in the period of October to December, and conveyed much insights on current poverty problems. For instance, the trend of poverty problem in 2009-2014 was found to be decreasing in scope but increasing in depth. Also, the 2014 poverty alleviation index is not effective in reflecting the real positive impacts brought by poverty alleviation policy of the government under the influence of an aging population and the changes in family structures. The detailed breakdown of impacts on different age groups is explained. We urged the need of focused and specific interventions for different target groups, in particular, improvement on remuneration of low-income workers.

Approaching the final stage of the project, we look forward to completion of data collection and analyses. We are excited about the dissemination of our findings and the impact these can have on public policy. During 2016, we will continue to do what we can to bring our findings to the attention of key policymakers, and to work collaboratively to help make Hong Kong a happier, healthier place for all. 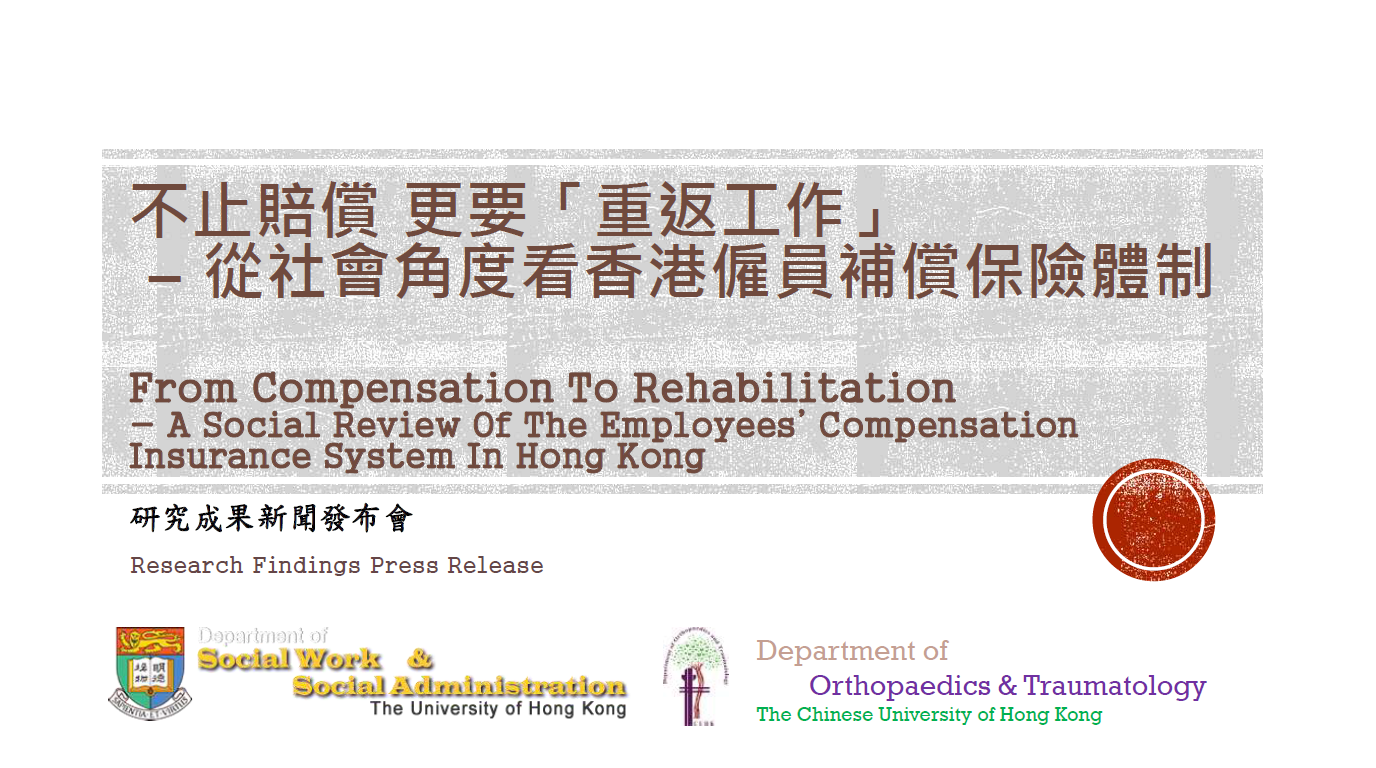 From Compensation to Rehabilitation

In Hong Kong, about 200 fatal and 55,000 to 60,000 non-fatal cases resulting from work-related accidents and diseases have been recorded each year. Occupational rehabilitation with an emphasis on early and comprehensive intervention immediately after injuries has demonstrated to be the international best practice in disability management post occupational injuries. The practice, however, has not been 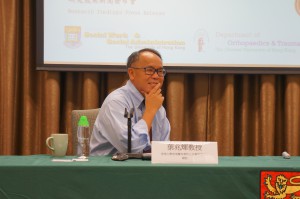 widely adopted in Hong Kong. To have an understanding of the underlying reasons, the Centre for Suicide Research and Prevention (CSRP), Department of Social Work and Social Administration of the University of Hong Kong (HKU), has conducted a consultancy project jointly with the Employees’ Compensation Insurance Residual Scheme Bureau (ECIRSB) to review the Employees’ Compensation system for local workers.

The CSRP held a press conference on 14 Dec 2015 to release its latest research findings and recommendations from the project on restoring the well-being of injured workers. Press release is available in both English and Chinese. The Powerpoint presentation is available in Chinese.

At the press conference, Professor Paul Yip presented the latest statistics on work-related deaths and injuries in Hong Kong, and on compensation insurance claims, such as the demographic characteristics of the workers who filed insurance claims, the types of common injuries, and number of working days lost from injury. He also spoke about the major problems in the current system, namely a compensation-focused culture and the physical and psychological barriers that hinder the success of return-to-work for injured workers, such as stress from family and employers, and the loss of self-esteem. Recognizing the challenges encountered by injured workers on the road of recovery, professor Yip stressed the importance of primary, secondary and tertiary prevention strategies and called for a collaborative effort of building a worker-centered system. 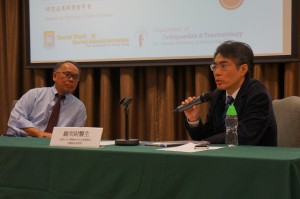 Doctor Sheung Wai Law, an honorary clinical associate professor from the Department of Orthopedics and Traumatology of the Chinese University of Hong Kong (CUHK), shared a success story of implementing a multidisciplinary rehabilitation model with the focus on early intervention – the  Multidisciplinary Orthopedics Rehabilitation Empowerment (MORE) Programme. This programme has demonstrated great success in facilitating early and safe return-to-work for injured workers. With the positive impacts brought by the MORE programme, the project hopes to initiate efforts of expanding the programme, so more injured workers can gain access.

Last but not least, the CSRP would like to express gratitude to all the stakeholders who contributed to the project and those who provided utmost support for the project’s effort in propelling meaningful changes for workers health and social well-being of Hong Kong.